When climbers reach summit, they are awed either ways: Lhakpa Gelbu Sherpa

KATHMANDU: ‘You are what you are born for, nothing else works on you.’ Lhakpa Gelbu echoes when he says, ‘You never know, what your profession in your life will be.’ In case of most Nepalis, you survive with your career, which you never have dreamt in your life.

After appearing the School Leaving Certificate (SLC) exam in 1996, Lhakpa Gelbu Sherpa, 16 times Everest Summitter, left his village Solu Dudhkunda Rural Municipality-2, of Solukhumbu district for Kathmandu, to earn his living. He failed School Living Certificates (SLC) in three subjects and could not pursue it ahead due to the economic constraint.

After working in the trekking field for 4 years, he became more focused on mountaineering. Then, there were no TVs, mobile, or internet in the village. Yet, when he heard the name of the mountaineers who successfully ascent different mountains in Nepal, he felt a call to become a mountaineer.

Within 3 years, during the trekking, he climbed 12 peaks including Mera Peak, Island Peak up to 6500m. After collecting the huge experience, he further equipped himself with different trainings offered by Nepal Mountaineering Association and other organizations. With Lhotse victory in 2003, he proved himself capable of summiting 8000ers. Lhotse was the first to prove he was a Hercules both in physical strength and self-confidence, the essentials to be a mountaineer.

For the Mountaineer, Northern side is much easier than Southern side. On North there is transportation service to Base Camp and Yak goes up to the Advance Base Camp situated at 6340m.

Recalling the days in 2004, Sherpa never forgets the incident when his teacher honored him for climbing Mt Everest. It is a life memorable event. ‘At that time, I thought I chose the right path’, Sherpa recalled. “Although expedition organizers select their own ‘Sherpa’, the climbers demand the specific ‘Sherpa’, who they are familiar with,” he claimed.

Many foreign climbers fulfill their dream to climb Mt Everest by selling their house, lands or their properties or saving their money from hard work, he shared. If they could not reach to summit, everything goes in vein, he told Khabarhub.

When climbers reach to summit, they cannot speak. He experienced that people could not speak out anything when they are extremely happy. 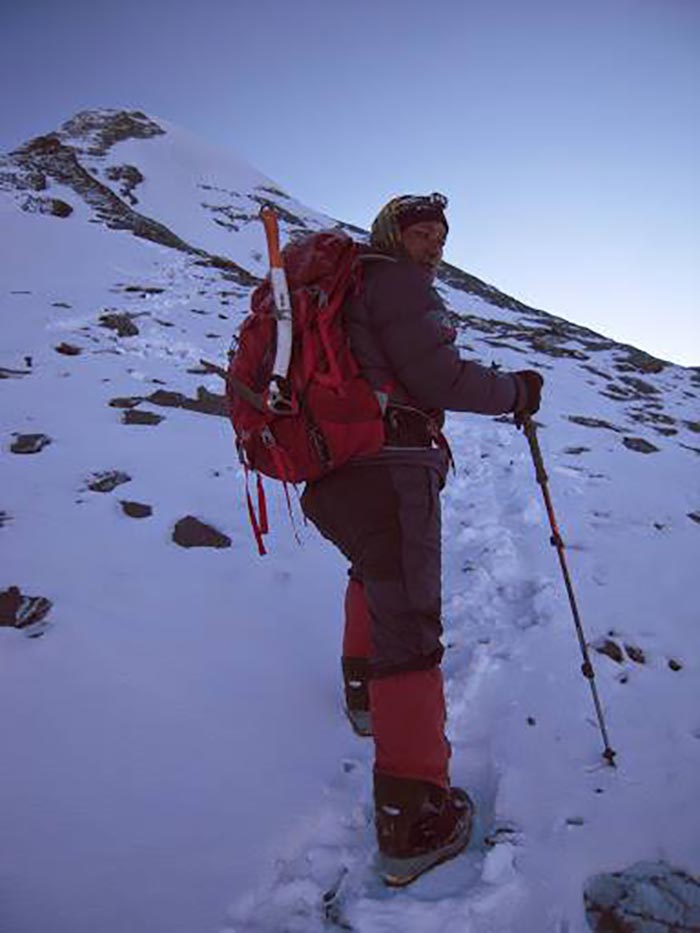 However, this job is satisfying, we can earn up to 600,000 rupees or more in a season; no government employee can earn more. What’s lacking is the security and proper management from the Government of Nepal, he complained.

He has huge experience on the effects of Global warming in Everest as he continues climbing the Everest each year. “On the northern side, there is a pile of ice till Camp II. After Camp II, you hardly find the ice and should walk on the black rock,” he cited the effects of global warming on the Himalayas.

“On Southern side as well the layers of ice is diminishing every year. From Camp IV, you find the rock.” Sherpa said to Khabarhub.

The not only the people the mountains survived the changes of 2015 earthquake. “Now, there is no Hillary Step, it is destroyed from the 2015 earthquake.” Sherpa mentioned the traces of earthquake in the Himalayas.

“When I reached the summit in 2004, we could easily sit 8-9 people on Summit but now, hardly  3-4 people can accommodate there and take pictures,” he further explained the effects speaking to Khabarhub.

He has bitter experience with the poor country like Nepal in case of expedition. “On Tibet side, when the guide suggests a climber, ‘you are not allowed to go from here,’ they stop but when we say on our side, climbers raise question to us and insist to cross the borders.” Lhakpa Gelbu said

“Mountains are our god fathers,” he told Khabarhub, “without them we are nothing.”

“Mountains are the main sources of incomes to many people, organizations and provide employment to a large number of people,” he said. However, he is planning to break the record of Lakpa Gelu Sherpa, who has the record for the fastest climbing of Mount Everest in only 10 hours 56 minutes and 46 seconds in 2003.

Lhakpa Gelbu wants to set every record possible in Everest, as it is the highest peak. “Everyone in the world praises more when you are Everest Summiteer rather than any other 8000ers summiteer.” He tried to shed light on his focus on Everest deeds.

He suggests the government to appoint the Everest summiteer as a liaison officers as a way out of minimizing the false claims made by the climbers.