Trekking 8 hours from Lukla to Namche Bazaar. I DO NOT RECOMEND DOING THIS. Going from 1400m (KTM) to 3400m (Namche) can be very hard if you are not used in high altitudes. The last incline just before Namche is very hard and will take several hours. We made it to Namche just before the dusk. Rather than rushing to Namche take two days for this part and enjoy the views!

Went for a 5 hour trek to Khumjung (3790m) via Everest view point. Mount Everest can be seen from distance. Visited Khumjung monsastry and took a look at the mythic Yeti scalp. Easy day.

First 3 hours are very easy since going downhill, but the climb to Tengboche is one of the hardest during the whole trek.

Path goes down to a river and climbs back up, but still one of the more pleasant days during the trek. Had a slight symptoms of altitude sickness.

Climbing the peak of about 5000m next to Dingboche, took us about 3 hours up, 2 hours down. Still sight headache etc.

Very easy terrain and you can see the Chukhung from Dingboche. Took us only about 90 minutes to reach Chukhung. As the distance was very short we decided to acclimate by walking towards Island Peak base camp on the same day. I only went about 200m higher as I started having altitude sickness symptoms again, but going IPBC and coming back should not take more than 4-5hours.

Climbed the Chukhung Ri, peak next to Chukhung. Possibly the hardest day during whole trek and also the highest point we went (around 5650m). Last 150m were closer to mountain climbing than trekking. Very challenging for a acclimatization day and also severe headache from spending long time in high altitude.

We were planning to take the high pass from Chukhung to Lombuche, but while taking a “shortcut” lost the actual path.After walking about 2 hours we ended up on a rock wall and saw the path above us. Tim, who has rock climbing experience, made the climb with the bag pack, but I did not dare to try it. Tim waited me at glacier while I was trying to find the right path. After few hours of fruitless searching decided to take the main path to Lobuche. Arrived to Lobuche after about 10 hours of walking (Dingboche to Lobuche took about 4 hours) and reunited with Tim. Make sure you keep at the path all the time if doing high passes! Big group or a guide is recommended!

Walk from Lobuche to Gorak shep took about 2 hours. Glacier between the two is actually just a series of rocky ridges. Most of the way is level, but last kilometer takes more than an hour. Since we arrived early decided to visit the Everest Base Camp on the same day. Most guide books say that it takes total of 6 hours there and back, however we found the path rather easy and it took us only about 3,5 hours total.

We left around 6:00am, but most groups leave around 4:00am to catch the sunrise. Peak can be crowded on the morning, but when we arrived around 8:00 am there was only few people at the top. Amazing views! After doing Chukhung Ri three days earlier climbing Kala Pattar was rather easy for us. Most people find it very hard and it can take over three hours to the top. We made it to the top in about two hours.

After visiting Kala Pattar I decided to skip the last two high passes and head back to Lukla for few extra days in Kathmandu. Tim and me parted at Lobuche and I made it to Tengboche in 7 hours (with only about 30 minutes pause). I do not recommend this much walking for anyone! However when coming down to a lower altitude the extra oxygen in air might give you a lot of extra strength.

Departed Tengboche at 6:30 am, reached Namche around 9:15 am walking high speed without rest stops. Departed Namche around 10:00 am and reached Lukla 3:00 pm after non-stop walking. I was totally exhausted and my knees were aching after coming down all those downhills and steps from 5500m to 2400m in two days. Not recommended, but possible to do for anyone in hurry to catch a flight.

Tried to get my flight date changed several times and ended up sitting in Tara Air office of Hillary Tenzing airport for about 4 hours. The airport was closed due bad weather, but we kept waiting until afternoon. Around 1:00 pm KTM gave permission for 4 planes to depart to Lukla. Luckily got a seat in third  airplane and arrived KTM late afternoon.

Lobuche Peak a beautiful scenery in Everest Region 2020-07-05 13:27:46 admin
Well, Lobuche Peak is one of the amazing Peak to climb in Nepal. It is located in the Everest region. To be more specific, it lies in the Sagarmatha National Park. Thus, Lobuche has also been considered as a heritage site by UNESCO. The famous Wild Yak Expeditions claim it as the best trekking peaks in the world. Talking about the beauty of Lobuche Peak, it has 8000 amazing peak views fr... read more

FAQs for Everest Base Camp Trek 2020-07-05 13:17:00 admin
As you plan for the trek to the highest peak in the world, you need to plan certain things to make your trek easy and comfortable. The trek to the Everest Base camp should be one of the most memorable treks of your life. So, you need to plan for certain things before you pack your bag to get to the highest peak in the world. Here are some of the most asked questions and the answers t... read more

Everest Base Camp in Winter 2020-07-05 13:13:05 admin
The temperature and climate in the mountainous region are harsh in comparison to the Hilly and Terai region of Nepal. So, the temperature in the Everest Region of Nepal falls to the extremities in the winter season. The trek to the Mount Everest can be hectic and tough during the winter season. But, it is not that you will not be able to get to the highest peak in the world. Although you... read more 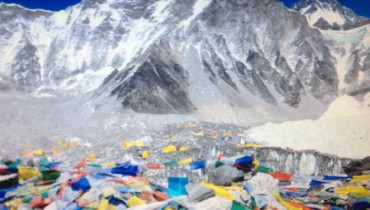 Best Time to Trek Everest Base Camp Trek 2020-06-19 15:10:12 admin
It’s the dream of almost everyone to trek to the highest peak of the world, Mount Everest. However, trekking to the Everest region can be tough at times if the season is not favorable. Although the journey is fruitful and will bring you to the best days of your life, the effort that you should put on should be high. As the weather in the Everest region is not favorable, it requ... read more

Route options for Everest base camp trek 2020-06-19 06:51:46 admin
Well, reaching to the base of Everest itself is a dream for many. It’s an achievable goal for visitors that’s not as dangerous as reaching the peak. The visit offers the visitors the close look of the Sherpa community, the magnificent countryside, the farmland, and the breathtaking view of the Himalayas.  Trekking to Everest Base camp is the fantasy of every trekker.&... read more

Monastries you can see during Kala Patthar Trekking 2020-06-18 15:13:03 admin
Trekking to the Everest Base Camp is probable of the most adventurous task. Trekkers get to pass through the beautiful high passes and extremely beautiful Dudh Koshi River. Among the many attractive stuffs that can be viewed during Kala Patthar trekking, monasteries draw the attention of many visitors. En route to Everest base camp, people can view some extremely beautiful Bu... read more
What make us different?
Need More Help
Quick Enquiry